TOP NEWS from LaplandHK: Santa IS coming to town!!

Rumours of Santa opening a secret workshop in Hong Kong this December have been confirmed! 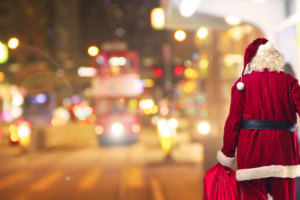 According to Head Elf, Doink, the secret branch in Hong Kong (fondly known to the Elves as LaplandHK) will be operational from the beginning of December. However, they are now appealing for ‘nice list’ families to come and train to be Elfers (Elf Helpers) in case extra help is required over the festive season. The training for Santa’s Secret Kingdom will take place on 10th and 11th December in a secret location on the East side of Hong Kong Island. Training will take around 1 hour 15 minutes to complete and a new training session will start every half an hour between 11am – 4.30pm. Elfer families will be led on a magical journey, by various expert Elves, discovering different parts of ‘Santa’s Secret Kingdom’. Little Elfers will be supplied with an Elfer Manual to keep track of the activities and tasks they have completed and an Elfer Uniform Apron to get them looking the part. Doink tells us that Santa checks each Elfer Manual himself to ensure all the tasks have been completed before presenting each Little Elfer with their Elfer Graduation Certificate and a little gift to complete their Elfer look. Big Elfers will get a treat too, providing they’ve worked hard as well! To register interest and for ticketing information visit Santa’s Secret Kingdom.

Head Elf and Santa’s main SpokesElf, Doink, tells us ‘To be an Elf you have to be born an Elf but we can train people to be Elfers (Elf Helpers)! Mind you, only those on the nice list are eligible to train.’ Santa has been inundated with work over in Lapland and rumours of the new workshop began at the beginning of this year when, towards the end of his round the world trip on the 24th December 2015, he accidentally let slip in a note he wrote to Charlie Smith when thanking him for the little tipple of brandy he’d left out.

Doink’s right hand Elf, Pippo, explains that although Santa’s Secret Kingdom should be kept as secret as possible, opening the new branch also brings its own difficulties, ‘Coming from the sub-zero climes of Lapland some of the Elves have found it very difficult to accustomise to the weather here in Hong Kong. We have had to send some Elves back to cool off so it might be possible that we’ll be a little understaffed in the new branch. That’s why we’re reaching out to families to train as Elfers in case we need extra help in the lead up to Christmas!’ Pippo went on to explain that they have run similar training before with great success ‘Some of the Big Elfers even cried because they found the Christmas spirit so magical,’ she added.

The Elves are optimistic that Santa’s Secret Kingdom will serve its purpose by lightening the workload over in Lapland and that it will continue to grow each year along with the Elf community here in Hong Kong; hopes that LaplandHK will grow to become a home for many Elves are high. Santa’s been inundated with work over in Lapland so to help ease the load he’s opened a secret branch right here in Hong Kong! But it’s too hot here for the poor little Elves! They need help from the families on the ‘nice list’ by training to become Elfers (Elf Helpers) – could this be your family?

Lizzi Wood-Vashishtha, is a heart-centered ladypreneur and founded Glitter and Gore in 2016. A professional performer from the UK, Lizzi has over 17 years of international entertainment experience – singing, dancing, acting and performing. When she’s not performing, Lizzi goes behind the scenes, managing Glitter and Gore, creating FUN experiences for kids, families, adults and companies as well as training the performers. Combining her passion and experience on and off-stage, she introduces unique theatre elements to the Glitter and Gore FUNtertainment services, generating wow-worthy, memorable experiences to the Hong Kong community.